SAUGERTIES, N.Y.--Daisy Farish rode Style to win the Overall Grand Championship in the 3’6” section of the 2018 USEF Junior Hunter National Championship – East Coast with a final score of 261.3 on Tuesday, July 31, at HITS-on-the-Hudson in Saugerties. 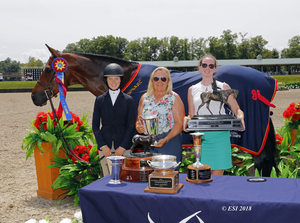 Daisy Farish and Style (ESI Photography)Nicole Dorwart and Cupido Z were named Overall Grand Champions in the 3'3" section with a final score of 258.1.

Farish of Versailles, Ky., impressed in all three phases of competition where a classic and handy round each counted for 40 percent of the overall score, and the under saddle made up the other 20 percent.

She and Style, a 9-year-old Dutch Warmblood gelding sired by Veron and owned by Take The High Road, LLC, earned scores of 89, 85, and 86.6 to win the classic.

Their under saddle scores were 88, 81, and 85.5 before they posted impressive handy scores of 92, 83, and 91 to clinch the tricolor in the Large Junior Hunter 16-17 section and take home a perpetual trophy donated by Christina S. Schlusemeyer.

WITH THE leading overall score over courses designed by Rian Beals of Saugerties, N.Y., Farish and Style, in his maiden appearance at the USEF Junior Hunter National Championship, were presented with the Monarch International Perpetual Trophy as Overall Grand Champions in the 3’6” section.

Farish had also won over a field of 96 in the Hunterdon Cup Equitation Classi riding Capital Hamilton on Monday, July 30.

The Overall Reserve Grand Champion honor in the 3’6” section was won by Ellie Ferrigno of Newton, Conn., riding Capitalized for owner Redfield Farm.

The score earned them the Large Junior Hunter 15 & Under section title and a perpetual trophy donated by Mr. and Mrs. Donald E. Stewart, Jr.

“Style is definitely a very special horse,” said Farish, who trains with Andre Dignelli and Patricia Griffith of Heritage Farm in Katonah, N.Y. “I was lucky to be able to ride him, and we just started competing together this winter.”

“He’s very qualified," said Farish. "If he was a jumper, he’d be jumping at 1.40m. He’s really jumping for fun out there because he is so scopey and athletic.

“He is fantastic in the handy,” she continued. “I think the courses suited him and he was able to go in and really show off. He loves the challenge!”

Dorwart of Etters, Pa., and Cupido Z, a 9-year-old warmblood gelding by Carthago Z, made their debut at the USEF Junior Hunter National Championship this week and claimed their highest scores to date to win the Overall Grand Champion in the 3'3" section.

“My rounds went amazing and we scored two of the top scores that I have ever had,” said Dorwart, who trains with Troy Hendricks. “Cupido Z is the most lovable horse I could ever ask for. He’s a dream come true.

“Each round, my goal was to be patient, keep a consistent canter, and wait for the distance to come to me,” said Dorwart of her classic and handy rounds. “We put so much time into showing, lessons, and flatting. Coming here and putting it all together to do what we practiced for all year is a big accomplishment.”

Overall Reserve Champion in the 3'3" section was awarded to Lauren Reid of Nazareth, Pa., and Oxford after they topped the Large Junior Hunter 3’3” 15 & Under section on a final tally of 256.2.

Hallie Grimes of Houston, Texas earned champion honors in the Small Junior Hunter 15 & Under section riding Inquisitive, owned by Can We Keep It? LLC, on a score of 245.1 to accept a perpetual trophy donated by Geri and Whitney Roper.

In the Small Junior Hunter 3’3” 15 & Under section, Linus Sophia Mitchell of Wrightsville Beach, N.C., won the championship on a score of 247.1 riding her own Linus.

Devin Seek of Ocala, Fla.),was champion of the Small Junior Hunter 3’3” 16-17 section riding Bugsy Malone, owned by Donald Stewart, with a score of 244.