WELLINGTON, Fla.--Martin Fuchs of Switzerland rode Clooney 51 to beat Kent Farrington on Gazelle bu just four-tenths of a second in the Winter Equestrian Festival's first five-star competition of the 2019 season, the $391,000 Grand Prix on Sunday, Feb. 9. 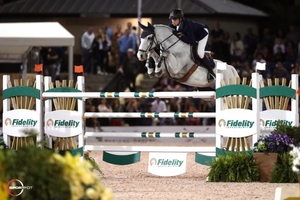 Martin Fuchs on Clooney 5 (Photo by Sportfot)Out of 40 entries in the grand prix, 18 were clear over the course designed by Kelvin Bywater of Great Britain.

It was a footrace in the jump-off, with nine going double clear, but it would come down to who took the biggest chances to see who would stand on top of the first five-star podium of the 2019 circuit.

First in the jump-off was Wilton Porter on Caletto Cabana, who was clean in 34.97 seconds.

Three horses later, Spencer Smith on Theodore Manciais brought the leading time down to 34.89 seconds, with the eight trips following not challenging that time, until Fuchs and Clooney 51.

Taking a gamble by leaving out a stride into the double combination and taking advantage of his horse’s giant stride, Fuchs and Clooney 51 made short work of the course, coming home in a time of 33.13 seconds.

“I KNEW my horse is in great shape," said Fuchs. "He has been great in the outdoor season over the past few months. He’s very experienced, so it was good for him to bring him straight out here under the lights. He still was a little surprised in the first round. He jumped very, very careful. I had to use more leg than usual.”

Richie Moloney of Ireland on Rocksy Music was quick over the last three jumps on course, but it would not be quite enough as they finished in 34.42 seconds for third place.

Riding out of the second to last position, Ireland's Conor Swail on Flower was also quick in 34.69 seconds, which left him fourth. 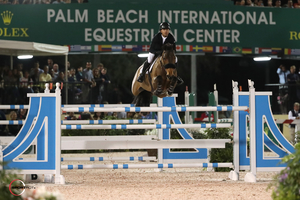 Kent Farrington and Gazelle (Photo by Sportfot)Last to go in the jump-off, Farrington went all out, banking on Gazelle’s inherent speed for the win, but it was not quite enough, as they finished in 33.57 seconds for second place.

“I knew I could make a nice turn from one to two, take all the risks for the double, and then just use his big stride which he has and trust in his jump and his carefulness,” he said. “I’m very happy with this win. Honestly, I was pretty sure Kent was going to be faster because we all know he is one of the fastest riders in this circuit. Obviously, I’m happy that for once he didn’t beat me and also gave the little Swiss guy a chance to win here in America.”

Farrington gave credit to Fuchs, who is the current individual silver medalist from the World Equestrian Games in Tryon.

“He’s a very competitive rider,” said Farrington. “He wins all over the world. He had a great result at the world championships ,and this is one of the best horses that he is competing. I also have my top horse competing, so I think regardless if there is 20 clear or two, we are going to be running as fast as we can go and everybody out there really trying to win.

“His horse is exceptional in that he can leave out strides in lines that other horses can’t do,” Farrington said. “He left a stride out to the double, and I think he was the only person to do that successfully. I thought that was too much risk for my horse. She is extremely careful, and I thought that was too much risk that she might stop if I tried to go that far away so I tried to catch him with foot speed around the rest of the course, but we fell a little short today.”

For Fuchs, the chance to compete outdoors, bring along his younger, inexperienced horses, and spend time with his girlfriend Paris Sellon for three months was reason enough to come to Wellington.

He brought six horses to compete at WEF, including his star horse Clooney 51, who, as Fuchs noted, has been clear over 18 of their last 20 1.60m classes.

“So far, we are having a very good time,” he said with a smile.