WELLINGTON, Fla,--Victoria Colvin rode Private Practice to win the $100,000 Hunter Spectacular at the Winter Equestrian Festival on Saturday evening, Feb. 16, while across the street at the Dressage Festival Katie Johnson on Paxton won the Developing Prix St. Georges with a score of 69.438 percent. 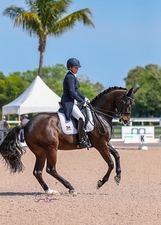 Katie Johnson on Paxton (Photo by Susan Stickle)The sixth week of the Dressage Festival featured National competition with a riders and horses in a variety of divisions.

Johnson and Paxton are now the first from the United States qualified for the Iron Spring Farm Future Stars Performance Series Final to be held in Week 12 of the Festival.

“I was very happy with my ride," said Johnson. "He’s still really green at the Prix St. Georges level. “I would say the highlight of our ride was our trot work. He really excelled there. His rideability has been progressing every day, and I’m happy with that. I’m hoping to ride in the final in Week 12, and am excited about the opportunity. It’s good to have something to look forward to. I would like to do the USEF Developing Prix St. Georges at Lamplight and would love to get him in one CDI by the end of season.”

In the Hunter Spectacular, 32 juniors, amateurs and professionals contested the round-one course designed by Ken Krome, with the top 12 returning for the second round of competition.

AMANDA STEEGE of Bedminster, N.J.,, and Lafitte De Muze held the early lead into the second course with the high score of 92.00 in the first course.

Designer Ken Krome gave competitors plenty of options to show off their horses’ abilities with several long approaches to gain speed and a rare bounce-jump feature made of hay bales halfway through the second round handy test. 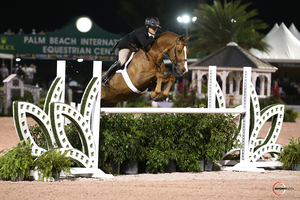 As the second-to-last to return, 21-year-old Victoria Colvin of Loxahatchee, Fla.,, and Brad Wolf’s Private Practice performed a flawless round to win the event with judge’s scores of 93, 94, 91 and a final two-round total of 182.66.

“This is the first year that I’ve won as a professional, and I think it almost means more to me now than it did when I was a junior,” said Colvin, who won the Hunter Spectacular a stunning four times in a row from 2012 to 2015. “When I competed in it as a junior, I knew it was an amazing class, but I probably didn’t realize how significant and amazing it is.”

“We showed this horse last year in this event as well, but we had just bought him and he was right out of being a jumper,” she said of Private Practice, who also won the 2018 International Hunter Derby Championship. “He was a lot more tame today, and he went around like a champ. His handy round felt like he did at Derby Finals, so I think it was as good as he could have gone.”

Steege gave it her all in the final performance, but fell just short of overcoming Colvin and Private Practice, totaling a final result of 182.16.

“I was hoping he would come out and be a competitor out there tonight, and I think it’s needless to say he far exceeded my expectations,” Steege said. “When we competed in this last year, he was a first-year horse and it was only his third show in America. It’s incredible to feel how much more mature he is a year later.”

“I was really happy with my round in the handy; I thought he jumped amazing,” she said. “I made the conscious choice to go around the red vertical on the way to jump one because my horse is a little less experienced than Tori’s and I just wanted to make this the most positive experience possible for him.”

Junior rider Jordan Allen of West Bloomfield, Mich., who is a working student for Ken and Emily Smith at Ashland Farm, finished third on Kind of Blue with an overall score of 177.57.

“It’s beyond exciting to be here and do so well in this event,” Allen said. “I thought he was amazing in both rounds, obviously, but in the second round I think he really stepped it up with the brilliance. It’s my final junior year and everything is shaping out!”