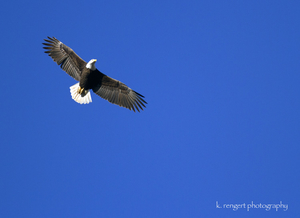 A photo by Kathee Regert As Executive Director of the Pennsylvania Hunt Cup since 2004, Rengert worked closely with Anne and Michael Moran as she juggled a myriad of details involved with putting on a sanctioned race meet.

All those who served on the committee over the years would agree she always pulled it off with a great sense of humor and steely determination.

She was a pioneering female steeplechase jockey, and her riding career extended more than a decade and concluded at the Virginia Fall Races in 1985.

"SHE WAS A great contributor to all kinds of activities in Pennsylvania, Maryland and Delaware," said Russell Jones, a top, now retired, bloodstock agent . "She was a addicted photographer. You hardly ever saw her without a camera in her hands."

"She was a highly competent steeplechase jockey, riding mostly for Mike Smithwick," said Jones. "She was a minor trainer, but she won some races. She was an avid birder. She traveled to the New Jersey shore, to the dunes, when birds were migrating."

"It would have been  impossible to keep the Pennsylvania Hunt Cup going without her," said Jones. "As soon as she realized how sick she was she started handing things over and training another."

"The first time I met her, we were both riding in a race," said Patti Miller, a bloodstock agent with EQB. "She won the race, and she always kidded me about it."

"She had such enthusiasm," said Miller "She had an infectious personality. She was a good trainer, a great rider, a good bloodstock agent, she was honest and a great person to boot."

Her good friend Sally Goswell wrote, “In the Mid-Atlantic racing community A Kathee was an accomplished rider, trainer, bloodstock agent and NSA official in addition to her long-time role as the Executive Director of the Pennsylvania Hunt Cup. In recent years Kathee also became well known for her fabulous photographs of horses working, nature soaring, lurking or playing and portrait work – behind each photograph was a story or a conversation shared with those of us who asked. Kathee had a wide range of interests which included competitive tennis, gardening (including volunteering at Longwood Gardens) and all manner of environmental causes. Additionally, Kathee recently completed a Master’s Degree in Urban & Regional Planning at the University of West Chester with an eye to continuing to make a ‘difference in her world.’”

She began K Rengert Photography in 1982 and started Bloodstock Purchasing in 1990.

She volunteered at Longwood Gardens in Gardens Tree Management and Mapping.

A memorial service will be held this Friday Oct. 12 from 4 - 5 pm at London Grove Friends Meeting House at 500 West Street Road, Kennett Square.

In lieu of flowers, please consider a contribution to an environmental charity of your choice.

The following are charities that Kathee supported: