Olympic bronze medallist Laura Graves and Verdades (aka diddy), have topped the FEI World Dressage rankings thanks to their double silver medal placings last month at the FEI World Equestrian Games in Tryon. 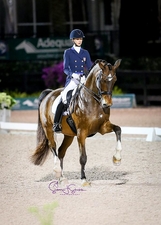 Laura Graves on Verdades sets new recodThe famous combination has become the first American partnership to be ranked world number 1, as they took home silver in the Grand Prix Special and the Grand Prix competitions, boosting their ranking points to 2714 points, and placing them one point ahead of Germany’s Isabel Werth and Weihegold Old.

Werth and Weihegold Old have held the number one position for almost two years, when they took over from fellow German Kristina Bröring-Sprehe in November 2016.

This ground breaking change to the top spot has now pushed them back to second place with a total of 2713 points.

THE WEG was an opportunity for several combinations to move up in the rankings, with Charlotte Dujardinof Great Britain and Mount St John Freestyle moving from 10th to 6th place (2416 points), while American Kasey Perry-Glass and Goerklintgaards Dublet jumped from the 20th to the 14th position (2267 points).

A number of other well-known combinations have soared into higher ranking positions this month, with Jessica Von Bredow-Werndl of Germany and TSF Dalera BB moving from the 53rd to 22nd position (2148 points) and Great Britain’s Carl Hester and his mount Hawtins Delicato made an enormous leap from the 130th to 23rd spot (2145 points).

Hans Peter Minderhoud of the Netherlands) with Glock's Dream Boy N.O.P. previously ranked 211th managed to get to 41st place (1891 points), and Sönke Rothenberger of Germany with Cosmo 59 jumping to 43rd place from 256th (1884 points).

As the FEI Dressage World Cup™ Western European League starts on Oct. 17 in Herning, Denmark, we will no doubt see some dramatic changes throughout the season, as these top international Dressage riders give good chase and maintain their world ranking positions.