MINERAL SPRINGS, N.C.--Jack Fisher trained three winners at the Queens Cup Steeplechase on April 27, including the winners of both the $30,000 Steeplethon and the $100,000 Sport of Kings Novice Hurdle. 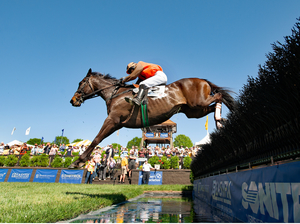 Hanno and Quinn Scala take the water jump (Photo by Tod Marks)With those three wins, Fisher increased his lead in Trainer, Races Won to 11 over Kathy Neilson, with four, and Leslie Young, Jonathan Sheppard and Lilith Boucher with three each.

Ricky Hendriks, who almost stole that title from him last year, has just one sanctioned win this year,

"I didn't change anything from what i did last year," said Fisher. "That's just the way it goes. Last spring the horses were running but not winning, and this year they're running and winning."

Mrs. S.K. Johnston's Hanno, ridden by Quinn Scala, won the $30,000 Steeplethon at 2 3/4 miles, winning by a length over Irvin Naylor's Ride Away, trained by Neilson and ridden by Gerard Galligan.

"HANNO WAS a mediocre hurdle horse," said Fisher. "He's a half-brother to a good filly Chris Mosley has. We decided to run him over timber."

"I wanted to give Quinn a ride, and she did a good job," said Fisher.

Riverdee Stable's Gibralfaro (Ire), ridden by Mike Mitchell, won the $100,000 Sport of Kings Novice Hurdle at 2 3/8 miles by 1 3/4 lengths over My Afleet, owned by Jeffrey Amling, trained by Mark Beecher and ridden by Kieran Norris.

Gibralfaro had been running in England as a 3-year-old when Riverdee bought him.

He won an allowance race at Tryon on April 14, 2018 in his first start for Riverdee and then ran in five hurdle stakes for the rest of the year.

"He ran second a lot last year," said Fisher. Gibralfaro was second in three stakes last year. "We''re going to give him a shot at Iroquois."

Fisher also trained both the winner and the second placed horse in the $30,000 Ratings Handicap Hurdle a 2 1/4 miles.

Duodecim Stable's All For Us, ridden by Willie McCarthy, won by 3 1/4 lengths over DASH Stable's Whitman's Poetry.