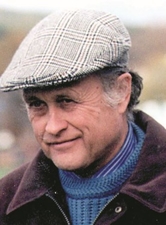 Jonathan Sheppard"Lead Investor belongs to a girl who used to work for me, Heather Gregorek," said Sheppard. "She works in licensing at Delaware Park now, but she's kept in touch."

"We've had this horse since last September," said Sheppard. "He ran in a point-to-point and finished second at Orange County. He ran fifth at Charleston last November."

"He's a sort of a hard knocking little guy," said Sheppard. "When he first got off the track, it took him a while to settle in. He was coming up to this race pretty well. He was just a bit ahead at the last fence and drew away to win nicely. Maybe we'll run him at Willowdale."

In the $15,000 Maiden Timber, Kinross Farm'a Jump to Juneau, trained by Neil Morris and ridden by Foley, won by a neck over El Jefe Grande, owned by Irvin Naylor, trained by Cyriil Murphy and ridden by Graham Watters.