FAIR HILL, Md.--In a duel down the stretch, Kings Apollo (GB) finished in the time of 6:08 for the three miles to win by about 2 lengths over Durer, while Devil's Brew was another couple of lengths further back. 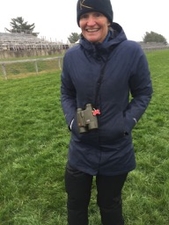 "Kings Apollo had a quiet run at Cheshire," said Neilson. "I felt he was not quite fit enough to run there, but I wanted to get a race in him."

"He jumped really well," said Neilson. "I loved the way Gerard rode him. We may go to Winterthur next. Dixon (Stroud) wants me to go to Willowdale, but I'm thinking Winterthur. He won there last year."

Fair Hill suffered from a terrible weather day that cut way back on its attendance.

IT WAS A cold, damp day of misty rain and temperatures hovering around 40 degrees, made to feel more like 30 degrees with a 30 mph wind slicing through the cold and damp.

It was perhaps made to feel even worse by the fact that the day before had been sunny with temperatures in the 80s.

It was a shame for Fair Hill, as the racing was excellent and would have thrilled spectators.

Julie Nafe rode owner/trainer Lauren Schock's McCrady's to win a duel to the finish in the Lady Rider Timber, winning by a scant neck over Virginia Korell on owner/trainer Elizabeth Korell's Leffingwell Lion and finishing in the time of 6:04.

Be Great, owned and trained by Diane Gillam and ridden by Bethany Baumgardner, was third in the five horse field.

Nafe nd McCrady's have had an amazing and successful spring, winning now in side saddle, foxhunter and ladies timber races.

McCrady's had led throughout the race and just held on for the victory.

"He was running comfortably in front," said Nafe. "I was just waiting to see who would try to jump us. It's such a long stretch, but I had just enough horse to hold off and win."

Flying Horse Farm's Jesse O, trained by Jazz Napravnik and ridden by Matthew B. Martinez, dominated the Heavyweight Timber race, leading at times by 70 or 80 lengths and finishing in 5:51 to win by about 10 lengths over David Belt Jr.'s Carnival Carl, trained and ridden by Beecher, with Nancy Jane Reed's Awesome Adrian, trained by Katherine Neilson and ridden by Galligan, finishing third.

"Jesse likes to be in front," said Martinez. "I actually felt he led quite nicely. He still was feeling pretty good after the last fence."

ERIC PORETZ rode Caves Farm's Western Exchange, trained by Dowling, to win the Novice Timber race in 5:41, the fastest time of the day.

"He broke off sharp," said Poretz of Western Exchange. "This was his second race over timber. He won at Green Spring. He jumped fantastic. He improved his jumping from last time, which in itself was fantastic, because jumped great at Green Spring."

Ricky Hendriks gave his son McLane a leg up on Debra E. Kachel's Stay Awesome to win the Maiden Training Flat race, section A, over a field of seven.

"My Mother (Wendy) picked this horse out," said Hendriks of the 4-year-old gelding. "We gave him a rest over the winter, and he's come back big and strong."

Leslie Young saddled Carol Atterbury's Makkadangdang, ridden by Archie MacCauley, to win the Maiden flat, section B. over a field of four.

"He's won a couple of hurdle races," said Wyatt of Bishop's Castle. "He won last fall at Montpelier. We'll get him tuned up and find a hurdle race for him in the next couple of weeks."

COUSINS Skylar McKenna and Parker Hendriks have traded wins in the Jr. Field Master's Chase (JFMC), Horse section, with Hendriks winning at Cheshire on Guts for Garters and McKenna prevailing at both Brandywine and Fair Hill on Embarrassed.

The junior races again drew by far the largest number of entries, with eight in the JFMC Horse race.

Patrick Gallagher rode Hoof Hearted to win the Small Pony Flat race in a field of eight, Elizabeth Barr won the Medium Pony flat over two  others, and JoeyDipierro on Hot Chocolate won the Large Pony flat over three others.

William Slater on Spicy won the Lead Line Pony race over a field of 10.